Toronto, August 11, 2020 – Magna Gold Corp. (TSXV: MGR, OTCQB: MGLQF) ("Magna" or the "Company") is pleased to announce that it has entered into an option agreement with a private party to acquire a 100% undivided interest in the Los Muertos silver-gold project located in the municipality of La Colorada, Sonora, Mexico.

The Los Muertos silver-gold project is comprised of two claims, covering 1,756 hectares, (approximately 5km by 5km) which are  located near Federal Highway 16, 80km southeast of the state capital of Hermosillo, and 30km southeast and on-trend with Argonaut Gold Inc.’s (TSX:AR) La Colorada mine (Figure 1).

The La Colorada Gold District, which includes the Los Muertos area, is defined by hundreds of low sulphidation epithermal-vein type historic silver-gold deposits and showings which remain largely unexplored. Vein clusters at Los Muertos share a common orientation with the four main zones at the La Colorada mine, between 045° and 090°. Government geological maps indicate that the Los Muertos project’s immediate area is characterized by extreme silicification, hematization and argillic alteration, suggesting the potential for both extensive silver-gold veins systems, and coincident, pervasive disseminated mineralization in the host sedimentary and volcanic rocks. 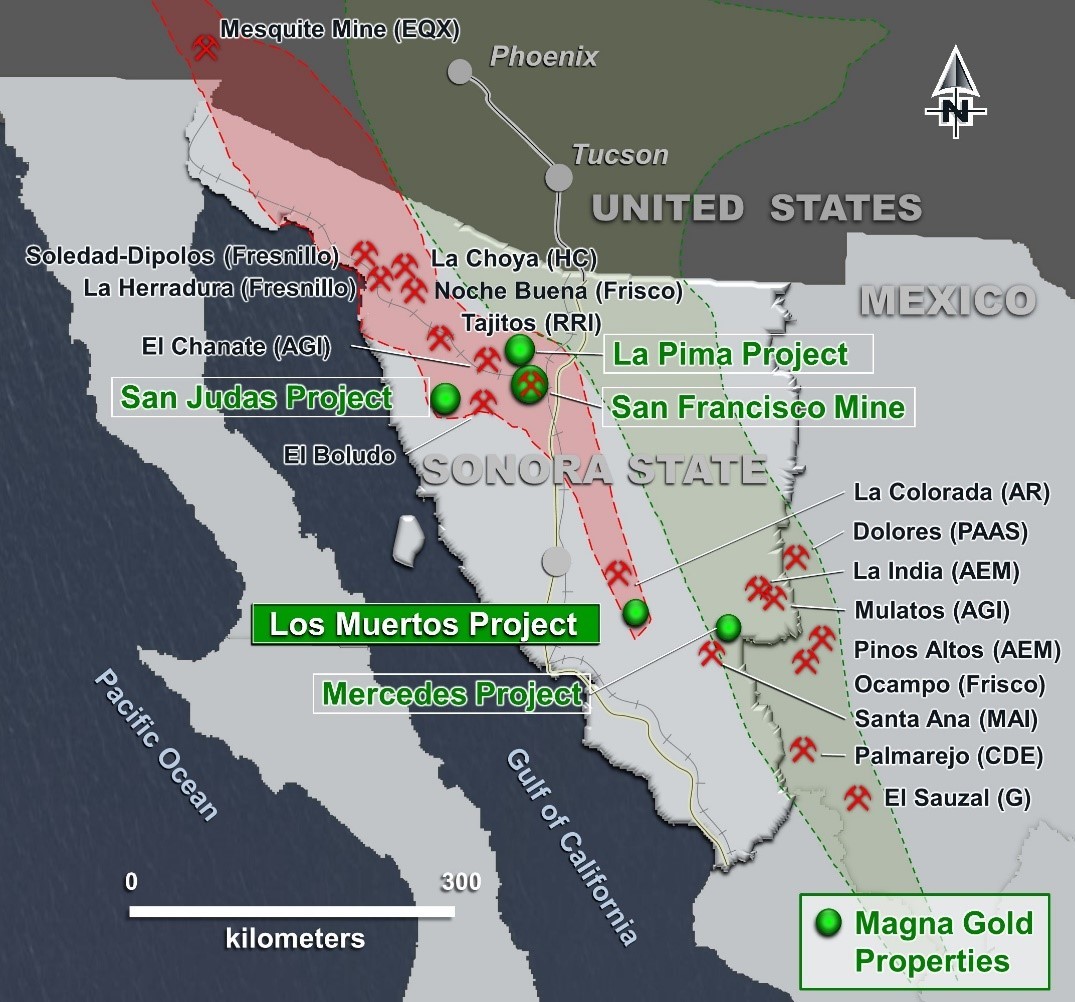 The Los Muertos project is ready for immediate RC drilling. The drill targets were generated by prior exploration work. Reconnaissance rock sampling over the properties returned values up to 388 ppm silver. A soil grid measuring 1km x 1.5km at a sample spacing of 50m x 100m returned clustered soil and rock silver anomalies (Figure 2). The project has been completely covered with an IP grid and the resulting resistivity and conductivity anomalies contribute importantly to the proposed drilling campaign. 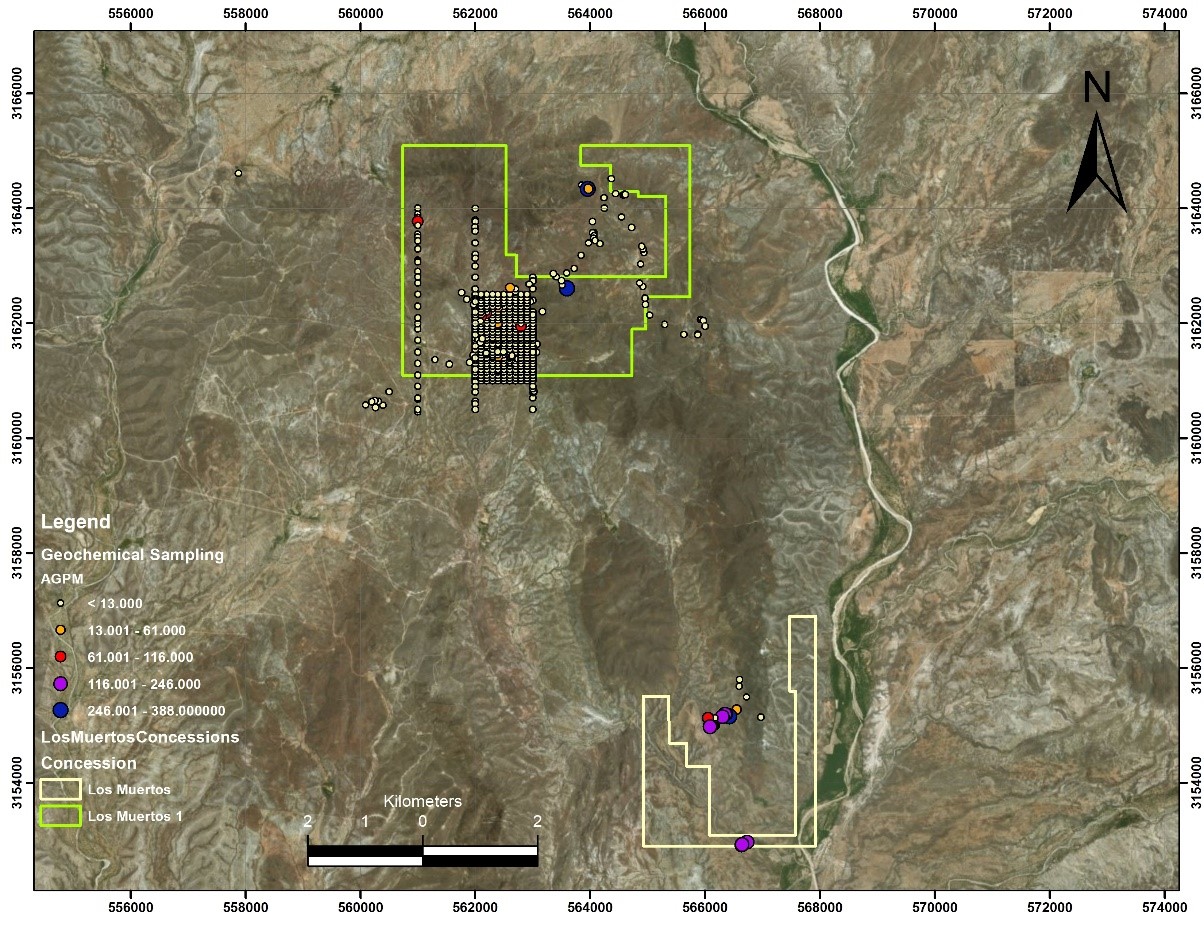 Arturo Bonillas, President and Chief Executive Officer of Magna, notes that: “Los Muertos exactly fits into our exploration pipeline profile. We understand the regional and local geology, and we are excited with the potential of Los Muertos given the project’s easy access, demonstrated mineral showings, and good geophysics. Los Muertos is drill-ready, and we plan to complete target confirmation and begin drilling as soon as possible. Magna is in an excellent cash and cash-flow position due to its well performing San Francisco mine, also located in the Sonora-Mojave Megashear.

The terms of the option agreement (the “Transaction”) provide that Magna can earn a 100% undivided interest in the Los Muertos Project (Los Muertos concession and Los Muertos 1 concession) by paying an aggregate amount of USD$425,000 plus VAT in five annual installments commencing on the effective date of the Agreement, August 3rd, 2020 (the “Effective Date”), and ending on the 48th month from the Effective Date.

James Baughman (P. Geo.), Consulting Geologist and a Qualified Person as defined by National Instrument 43-101 – Standard of Disclosure for mineral Projects, has reviewed scientific and technical information in this news release.

Magna Gold Corp. is a Canadian gold company engaged in operations, development, exploration and acquisitions in Mexico. Its primary asset is the producing San Francisco gold mine in Sonora, Mexico and exploration stage projects include San Judas, La Pima and Mercedes.

For more information, please visit www.magnagoldcorp.com or contact Arturo Bonillas, Chief Executive Officer, and a Director of the Company.

This news release includes certain "forward-looking statements" which are not comprised of historical facts. Forward-looking statements include estimates and statements that describe the Los Muertos Silver Project and the option agreement, the performance of the San Francisco Mine cash-flow, the Company's future plans, objectives or goals, including words to the effect that the Company or management expects a stated condition or result to occur. Forward-looking statements may be identified by such terms as "believes", "anticipates", "expects", "estimates", "may", "could", "would", "will", or "plan". Since forward-looking statements are based on assumptions and address future events and conditions, by their very nature they involve inherent risks and uncertainties. Although these statements are based on information currently available to the Company, the Company provides no assurance that actual results will meet management's expectations. Risks, uncertainties and other factors involved with forward-looking information could cause actual events, results, performance, prospects and opportunities to differ materially from those expressed or implied by such forward-looking information. Forward looking information in this news release includes, but is not limited to, information about timing of the technical studies and the results of pilot projects and operations, the Company's objectives, goals or future plans, exploration results, potential mineralization, the estimation of mineral resources, exploration and mine development plans, timing of the commencement of operations and estimates of market conditions. Factors that could cause actual results to differ materially from such forward-looking information include, but are not limited to, failure to identify mineral resources, failure to convert estimated mineral resources to reserves, the inability to complete a feasibility study which recommends a production decision, the preliminary nature of metallurgical test results, delays in obtaining or failures to obtain required governmental, environmental or other project approvals, political risks, inability to fulfill the duty to accommodate First Nations and other indigenous peoples, uncertainties relating to the availability and costs of financing needed in the future, changes in equity markets, inflation, changes in exchange rates, fluctuations in commodity prices, delays in the development of projects, capital and operating costs varying significantly from estimates and the other risks involved in the mineral exploration and development industry, and those risks set out in the Company's public documents filed on SEDAR. Although the Company believes that the assumptions and factors used in preparing the forward-looking information in this news release are reasonable, undue reliance should not be placed on such information, which only applies as of the date of this news release, and no assurance can be given that such events will occur in the disclosed time frames or at all. The Company disclaims any intention or obligation to update or revise any forward-looking information, whether as a result of new information, future events or otherwise, other than as required by law.