Toronto, June 06, 2019 – Magna Gold Corp. (TSXV: MGR.P) (“Magna” or the “Corporation”), is pleased to announce that it has completed its previously announced qualifying transaction (the “Qualifying Transaction”).

Pursuant to the option agreement dated September 25, 2018 and amended March 22, 2019 (the “Agreement”) comprising the Qualifying Transaction, the Corporation has acquired from the Seller an option (“Option”) to acquire a 100% undivided interest (the “Proposed Transaction”) in two mining claims (the “Mercedes Property”) located in the municipality of Yecora, Sonora, Mexico, for a four-year period. The Property consists of two contiguous claims covering an aggregate area of approximately 345 hectares is located approximately 250 kilometers east-southeast along the Federal Highway 16 from the state capital, Hermosillo.

In consideration of the grant of the Option, Magna will: (i) pay to the Seller an aggregate of US$1,340,000 plus VAT of 16%, paid in installments commencing on the 6th month from the effective date of the Agreement (the “Effective Date”) and ending on the 48th month from the Effective Date; (ii) issue to the Seller a 3% net smelter returns (“NSR”), capped at US$3,500,000 and subject to the right of the Corporation to acquire all 3 percentage points of the NSR at a price of US$500,000 per percentage point, within the first three (3) years of commercial production of the Mercedes Property; and (iii) conditional on the completion of a going public transaction within six months of the Effective Date, issue 2,442,105 common shares (“Common Shares”) of the Corporation to the Seller. On the Effective Date, the Discounted Market Price of the Common Shares was CAD$0.30 per Common Share. The Agreement is subject to regulatory approval. 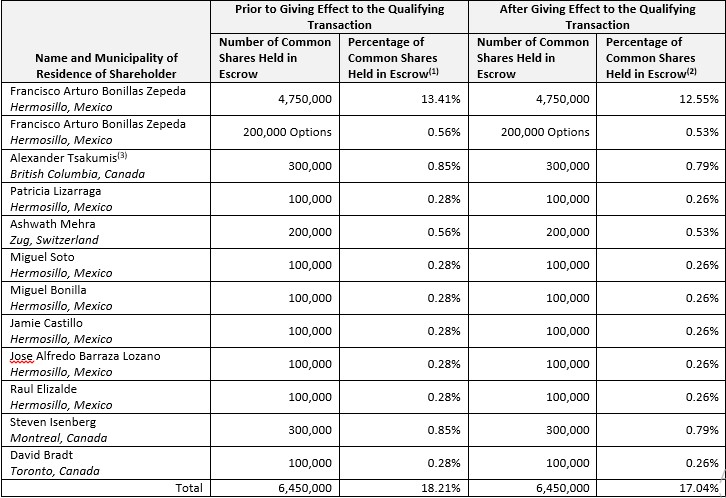 In connection with the Corporation’s Qualifying Transaction, the following securities of the Corporation are held in escrow pursuant to a value escrow agreement (“Value Escrow Agreement”).

In connection with the Qualifying Transaction, the Corporation completed a non-brokered concurrent private placement financing (the “Concurrent Financing”) for gross proceeds of CAD$2,668,219, comprised of the sale of 8,338,184 common shares (“Common Shares”) in the capital of the Corporation, sold a price of CAD $0.32 per Common Share.

Proceeds of the private placement will be used for exploration activities on the Mercedes Property located in Sonora State, Mexico, and for working capital purposes.

The securities offered have not been registered under the U.S. Securities Act of 1933, as amended, or applicable state securities laws, and may not be offered or sold to persons in the United States absent registration or an exemption from such registration requirements. This press release shall not constitute an offer to sell or the solicitation of an offer to buy nor shall there be any sale of the securities in any jurisdiction in which such offer, solicitation or sale would be unlawful.

Management of the Resulting Issuer

Upon issuance of the final exchange bulletin of the Exchange on or around June 10, 2019, providing final acceptance of the Qualifying Transaction, trading of the common shares of the Corporation is expected to resume trading on the Exchange under the symbol “MGR”.

Upon completion of the Qualifying Transaction, Magna will become an exploration company listed on the TSX Venture Exchange with its sole project located in the municipality of Yecora, Sonora, Mexico.

This News Release includes certain "forward-looking statements" which are not comprised of historical facts. Forward-looking statements include estimates and statements that describe the Corporation’s future plans, objectives or goals, including words to the effect that the Corporation or management expects a stated condition or result to occur. Forward-looking statements may be identified by such terms as “believes”, “anticipates”, “expects”, “estimates”, “may”, “could”, “would”, “will”, or “plan”. Since forward-looking statements are based on assumptions and address future events and conditions, by their very nature they involve inherent risks and uncertainties. Although these statements are based on information currently available to the Corporation, the Corporation provides no assurance that actual results will meet management’s expectations. Risks, uncertainties and other factors involved with forward-looking information could cause actual events, results, performance, prospects and opportunities to differ materially from those expressed or implied by such forward-looking information. Forward looking information in this news release includes, but is not limited to, the Corporation’s objectives, goals or future plans, statements, exploration results, potential mineralization, the estimation of mineral resources, exploration and mine development plans, timing of the commencement of operations and estimates of market conditions. Factors that could cause actual results to differ materially from such forward-looking information include, but are not limited to failure to identify mineral resources, failure to convert estimated mineral resources to reserves, the inability to complete a feasibility study which recommends a production decision, the preliminary nature of metallurgical test results, delays in obtaining or failures to obtain required governmental, environmental or other project approvals, political risks, inability to fulfill the duty to accommodate First Nations and other indigenous peoples, uncertainties relating to the availability and costs of financing needed in the future, changes in equity markets, inflation, changes in exchange rates, fluctuations in commodity prices, delays in the development of projects, capital and operating costs varying significantly from estimates and the other risks involved in the mineral exploration and development industry, and those risks set out in the Corporation’s public documents filed on SEDAR. Although the Corporation believes that the assumptions and factors used in preparing the forward-looking information in this news release are reasonable, undue reliance should not be placed on such information, which only applies as of the date of this news release, and no assurance can be given that such events will occur in the disclosed time frames or at all. The Corporation disclaims any intention or obligation to update or revise any forward-looking information, whether as a result of new information, future events or otherwise, other than as required by law.