The San Francisco Project is a gold occurrence with trace to small amounts of other metallic minerals. The gold occurs in granitic gneiss and the deposit contains principally free gold and occasionally electrum. The mineralogy, the possibility of associated tourmaline, the style of mineralization and fluid inclusion studies suggest that the San Francisco deposits may be of mesothermal origin.

The San Francisco deposits are roughly tabular with multiple phases of gold mineralization. The deposits strike 60º to 65º west, dip to the northeast, range in thickness from 4 to 50 m, extend over 1,500 m along strike and are open ended. Another deposit, the La Chicharra zone, was mined by Geomaque, as a separate pit.

The San Francisco property lies in a portion of the Mojave-Sonora megashear belt characterized by the presence of Precambrian to Tertiary age rocks represented by different grades of deformation and metamorphism as evidenced in the field by imbricate tectonic laminates.  The rocks principally involved in the process of deformation and associated with the gold mineralization in the region are of Precambrian, Jurassic and Cretaceous age.

The oldest rocks within the property are a package of metamorphic rocks which include banded quartz-feldspathic gneiss and augen gneiss, green schist, amphibolite gneiss and some amphibolite and marble lenses (Calmus et al., 1992).  All metamorphic rocks exhibit foliation which generally varies in strike direction from between 30° to 72° west and dips to the northeast from 24° to 68°. See Figure 1 for a geological map of the San Francisco and La Chicharra mine site.

The metamorphic rocks are intruded by a Tertiary igneous package, which includes leucocratic granite with visible feldspar and quartz, and is porphyritic to gneissic in texture. It appears that the granite was emplaced along low angle northwest-southeast shear zones in the system which developed between an older gabbro and the metamorphic sequence. This is the reason that in some places the granite bodies appear as stratiform lenses that vary in width from centimetres to more than 40 m and are subparallel to the foliation.  It is seen, however, that the emplacement of leucocratic granite also favours the N30°W fault system, causing the granite to take an elongated form, principally in direction N60°W, but with extensions along the N30°W system.

Besides the gabbro and the granite, dikes of different composition, including diorite, andesite, monzonite and lamprophyre, intrude the metamorphic sequence. In addition, lenses of pegmatite associated with the schist have been mapped, emplaced along the foliation planes, occasionally forming lenses within the gabbro and within the gneiss and on the border of the leucocratic granite bodies. All of the rocks described above form the San Francisco unit, which is the most important unit for exploration, with the leucocratic granite being especially significant because it is the primary host rock for gold mineralization.

Mapping of isolated outcrops and their geological interpretation demonstrates that the San Francisco unit is extensive within the property, covering a surface area of approximately 100 km2. The unit hosts at least 15 gold occurrences which are considered to be favourable exploration targets, in addition to the known San Francisco and La Chicharra gold deposits 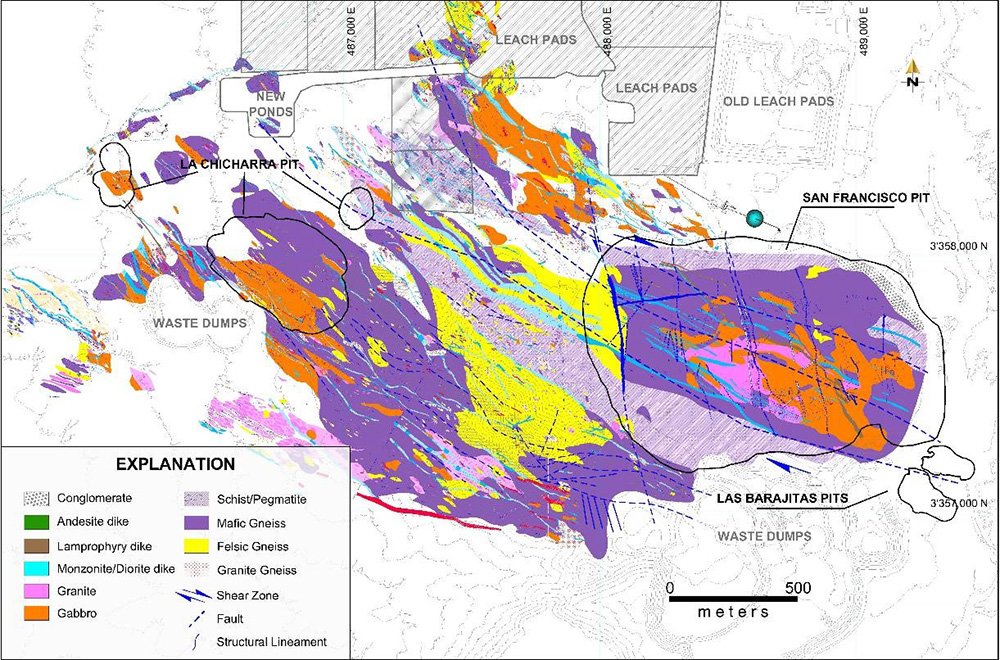