Magna fielded a team of geologists to San Judas December 2019, making significant progress based on mapping and sampling both on surface and in old underground works. Drone technology was used to capture high definition images from key areas, alterations, and structural features to aid in data interpretation. To date, the presence of gold mineralization has been identified and confirmed at these targets.

Santa Lucia and La Paloma are parallel gold bearing structures approximately 500 meters apart with strong hematitic alteration between the structures.  Santa Lucia is a bulk mining target consisting of a series of shallow historical mines (trenches and shafts) distributed along a line of over 900 m in length, with a 135-degree azimuth. Most of the historical mines are developed in quartz veins and veinlets hosted in a granoblastic granite showing argillic alteration within a sheared fringe. Mapping has identified parallel structures on historical mines in sheared granite with quartz veinlets, oxides, and boxworks of the original sulfides (pyrite, galena, etc.). Immediately north of Santa Lucia is the Las Palomas area, where historical mines were developed on six parallel structures in granoblastic granite, dipping 45 – 50 degrees, 150-degree azimuth, sub-parallel to the Santa Lucia trend. Historical mines tend to be of low angle, at depth with high angle fracturing of gray quartz cutting the main structures and foliation in the granite. The best gold values at Las Palomas site are 26.40 g/t Au producing adjacent samples of 14.60 g/t Au, 5.54 g/t Au, 7.30 g/t Au.  These samples are strongly oxidized with stockwork veining containing boxworks from sulfides and strong hematite alteration. Assay results of samples over 0.1 ppm Au are shown in the Table 1.

San Martin hosts gold in oxidized granite and gneiss pervasive hematite and limonite alterations.  Mineralization is quartz stockwork along foliation and cross cutting quartz veinlets.  San Martin has a series of historical mines positioned 155- and 180-degrees azimuth, dipping strongly to the West and East in lengths that vary from 150 to 200 meters, over an area of 1,250 m in length and 750 meters in width.  Several historical workings and areas of strong hematite alteration were sampled, and assay results are shown in Table 1.  The key take-away of the sampling and geological work to date in the San Martin area is the fact that the historical high-grade small mines are aligned with North-South trending structures with lower grade hematite stockwork in low-angle veining structures in the host rock, opening the possibility of finding high volume bulk deposits.

San Martin Sur lies at the southeastern end of the structural trend formed by the veins system-shear zone of Santa Lucia, Las Palomas and San Martin. Similarly to those, this area is characterized by the existence of shallow historical mining works developed by small prospectors in the past along quartz veins, stockworks filling fractures, fissures and local shears developed along the foliation. The host rock is a biotite-sericite-chlorite gneiss with strong oxidation and with quartz-pegmatite-muscovite, andesitic and gabbro dikes emplaced along pre-existing shear zones and faults. Boudinage areas with varying quartz and pegmatite vein thicknesses are common.  Gold values are associated to two structural systems: 1) One conformed of quartz veins, stockworks, breccias and sulphide boxworks, quartz veins (galena, pyrite, sphalerite), occasionally disseminated fine pyrite, the system is substantially parallel to the foliation of the host rock with azimuths of 75 ° to 100 ° with dips from 22 ° to 55 ° to both, SW and NE and; 2) Another system conformed of veins and quartz veinlets with iron oxides that are mainly 355 ° to 30 ° azimuth high-angle dips that become vertical, primarily hematite and jarosite. Many of the historical works found in this area were developed along this system.  Interpretation results from assays indicate a mineralized structural trend along the Santa Lucia, Las Palomas and San Martin mineral zones, extending up to 4.5 km long and over 1km wide

Represo Seco is a high grade sheeted and brecciated vein system with three generations of quartz; white, crystalline quartz and chalcedony-drusy, filling open spaces in granite two meters thick with a strike length of 65 meters at the Represo Seco site and is open ended.  Rock chip samples indicate a strong possibility of stacked gold structures along faults in the granite host.  Magna collected a trench sample that ran 7 g/t Au at Represo Seco.  Mapping and sampling are ongoing to the southwest to the property boundary with outcrops containing stockwork with hematite, jarosite, limonite, sericite alteration, clays, chlorite, bands of crackled jasperoid silica, and fine-grained magnetite disseminated in fractures. The host rock is granite. See table 4).

Pepitas is located South of the San Francisco ranch and in between the Cueva de Leon and Represo Seco targets. There is evidence of prior extraction of material with gold nuggets. Although the area is covered by alluvial, there are silicified beds of intrusive and quartz veinlets with gold values at the bedrock. These resemble those from Represo Seco as high grade sheeted and brecciated vein-veinlet systems of low angle, exposed by just a few centimeters. During reconnaissance work along a shallow creek at the north of the Pepitas exposure, there was discovery of another exposure similar to that of Pepitas. Sampling on the structure returned gold values of 2.691 ppm, 0.773, 0.549, 0,111 ppm Au defining and area of high priority of 700 x 500 m. In total for this area, Magna geologists collected 65 rock chip samples from which 16 returned gold values above 0.1 ppm (see Table 5).

Cueva del León hosts argillic altered intrusive felsic rocks that strike from Nto S and dip 45° generally to the west. Initial assays have been in the 1.3 - 3 g/t range.  Located in the south-central portion of the property, it is an area with gold mineralization that extends east to west. The most notable evidence is a series of historical mines occurring along a line of about 100-120 meters. The most important of which is Cueva del Leon, developed along a fault vein of quartz and quartz-hematite stockwork hosted in gneiss. Mineralization projects westward along the valley under the alluvial cover and towards Represo Seco and Pepitas targets, then parallel to the regional mineral structures within the San Judas Shear Zone in the northern part of the property. The next step in the plan is to extend the exploration (mapping and sampling) in both directions of Cueva del Leon structure, perpendicular to the general azimuth of the structure exposed in the adit. The purpose is to determine whether there is continuation of the structure observed to both northeast and southwest. 16 out of a total of 72 samples collected at the La Cueva del Leon area returned gold values above 0.1 ppm (see Table 6).

Las Auras: Geological reconnaissance and rock chip sampling was carried out in the area known as Las Auras, an isolated historical tunnel carved by small prospectors that extends a few meters over a vein-fault with an azimuth of 345 ° - 70 ° dip, cutting the foliation; the host rock is a gneiss and mineralization is associated with quartz veins and veinlets as well as breccias filling fissures in the gneiss. Ten samples were collected, and results are shown in table 7

A composite map of rock chip/soil sampling and geology indicate the San Judas Shear Zone along  the veins systems of Santa Lucia, Las Palomas, San Martin and San Martin Sur along the NE end of the property; crossing the Sierrita Prieta Hills entirely from NW to SE. On both SE and NW ends, the shear disappears below the alluvial cover. On the SE end, remnants of trenches and small pit exist from were gold was extracted; at the NW end, a preliminary soil sampling line returned high gold values in the projection within the valley of the shear zone. The exploration program for 2020 includes additional soil sampling on the horizon C of the alluvial cover. On the first attempt, samples were collected from the bottom of holes that were 50-60 cm deep.

On the Pepitas and Represo Seco, the soil sampling was replicated W to E and N to S; 1,000 m in length, with samples 100 m apart. 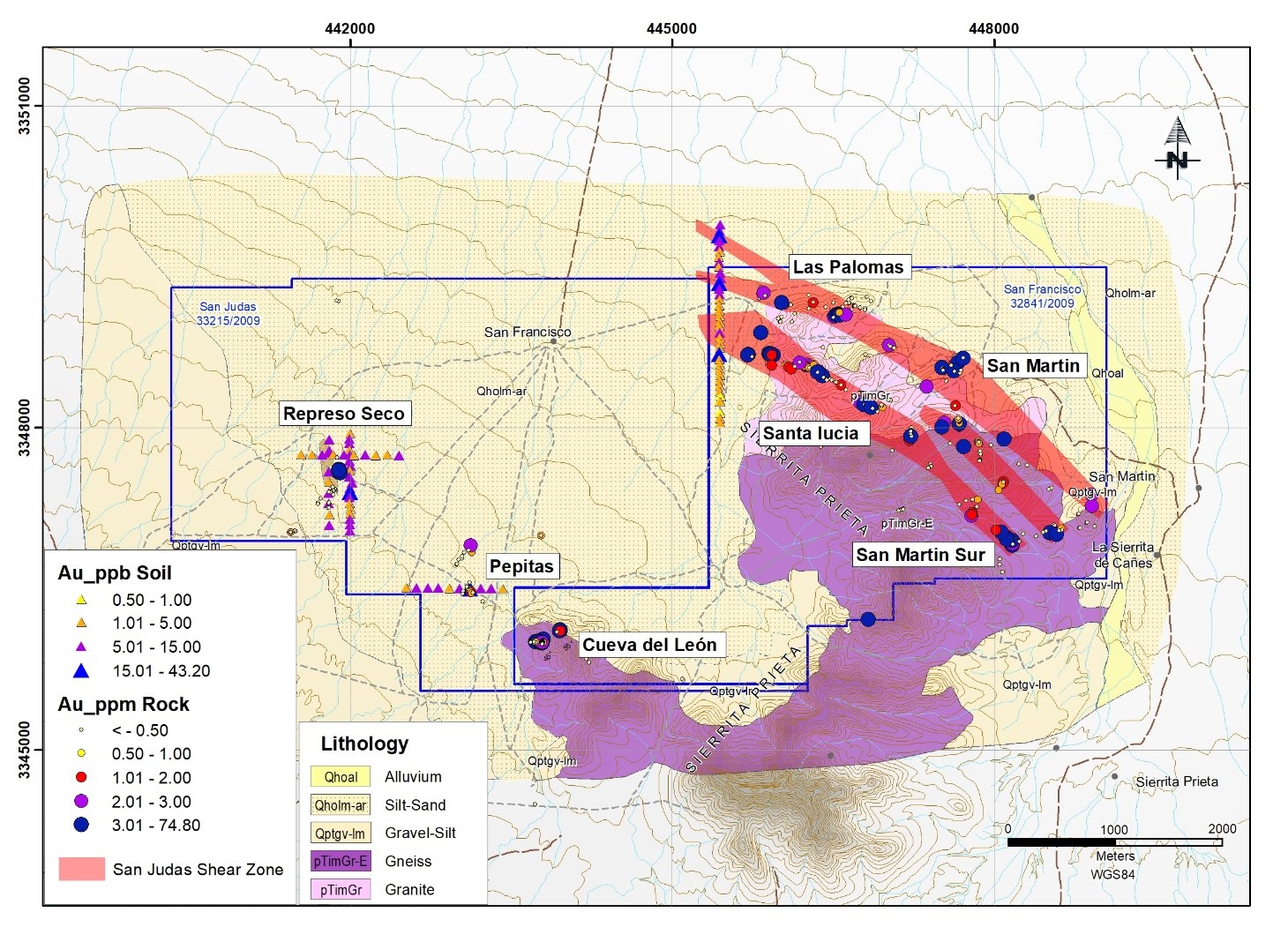 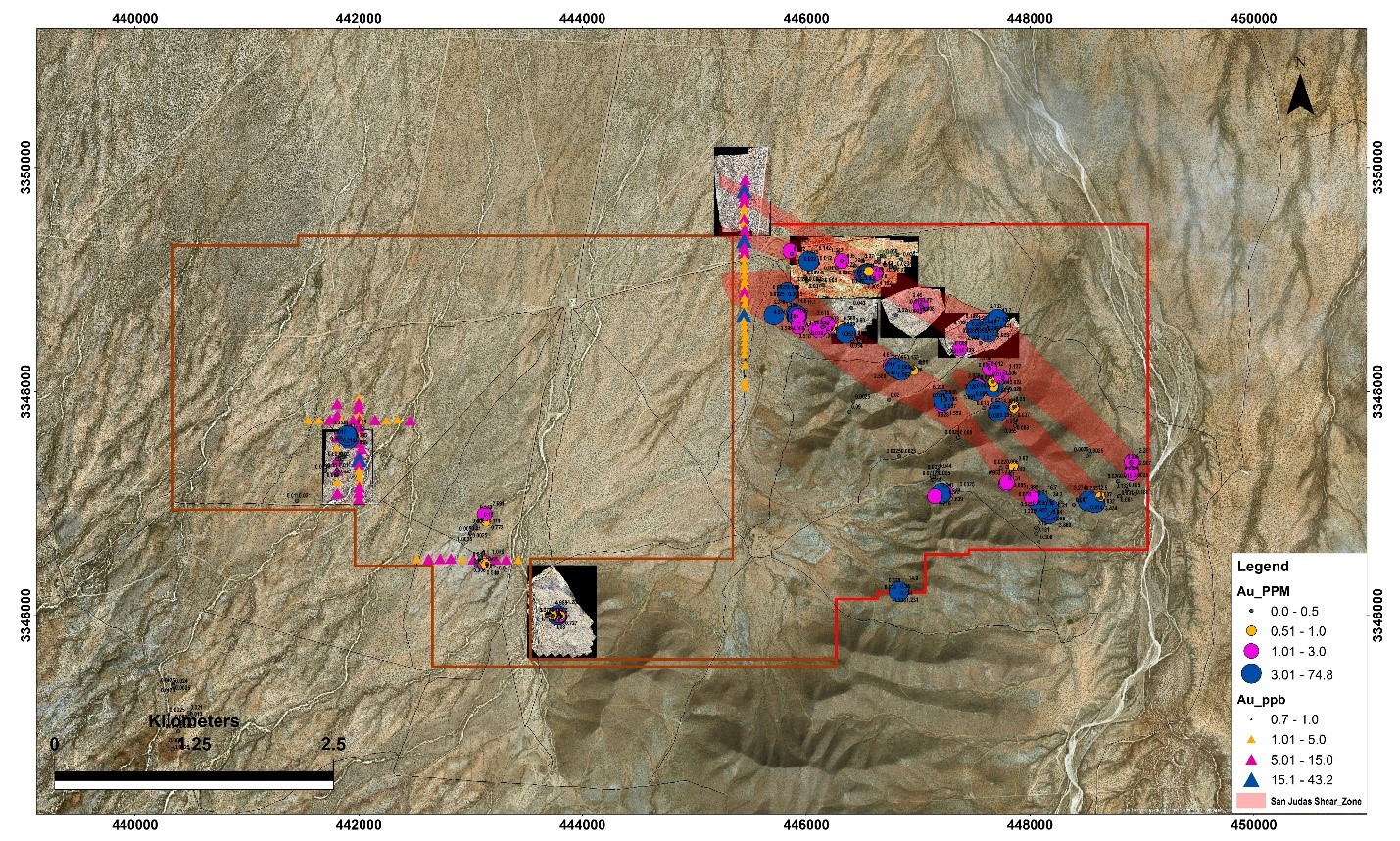 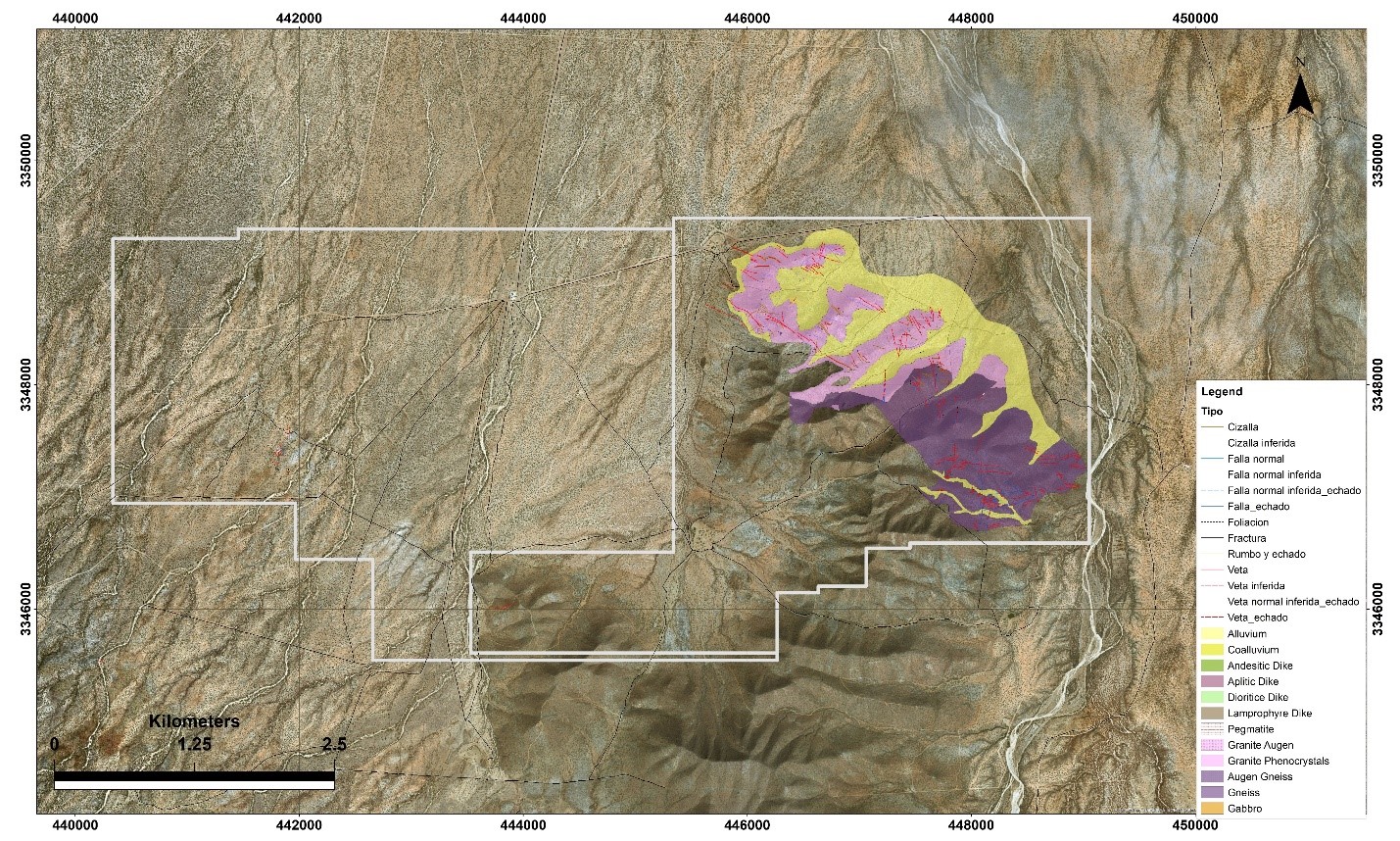 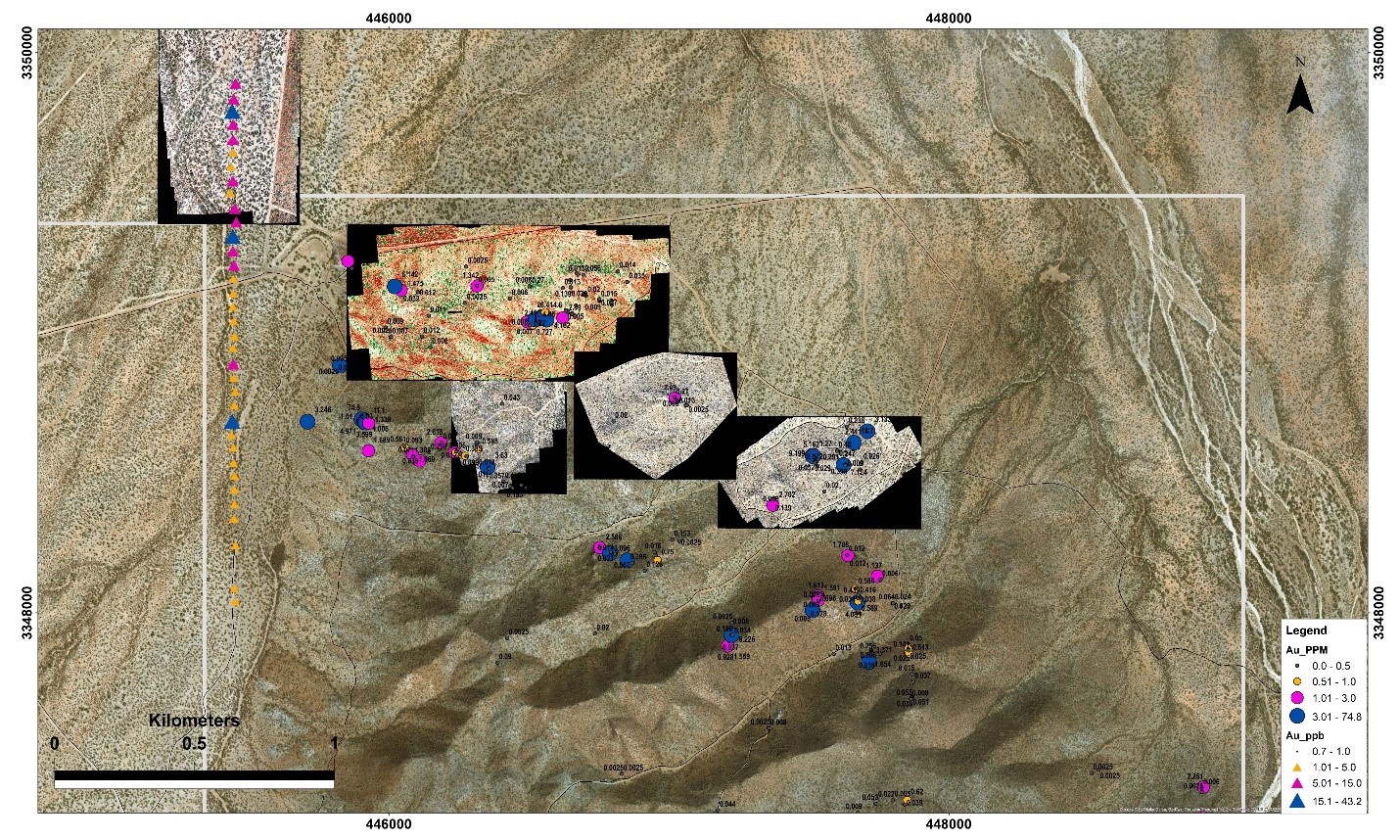 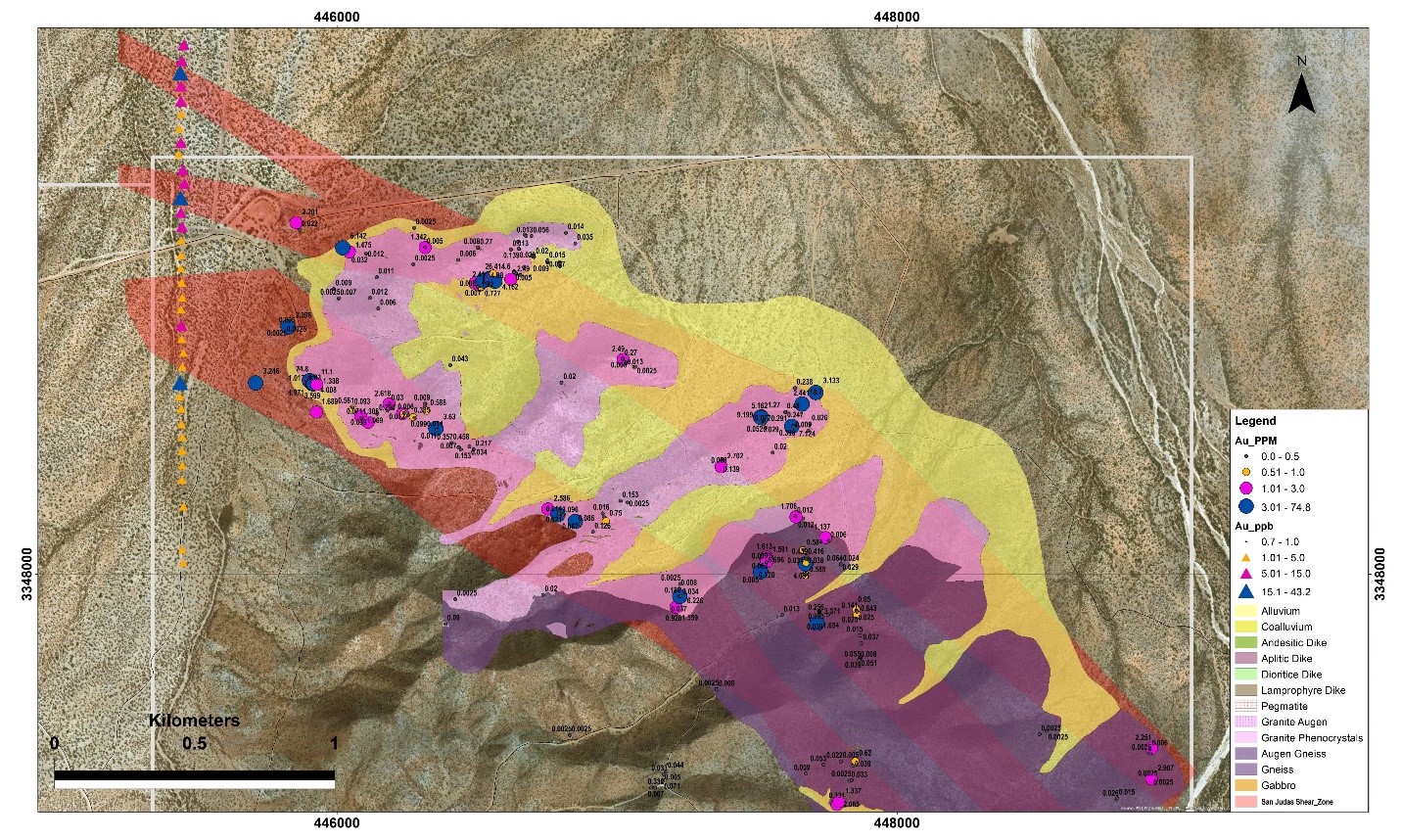